Megan Mayhew Bergman was raised in North Carolina and now lives on a small farm in Vermont. She is the Associate Director of Bennington College’s MFA program and serves as a Justice of the Peace for the town of Shaftsbury.

Megan studied anthropology at Wake Forest University and has graduate degrees from Duke University and Bennington College. She received fellowships from the Millay Colony for the Arts, Breadloaf, and the American Library in Paris. She was awarded the 2015 Garrett Award for Fiction from the Southern Fellowship of Writers, and was nominated for the Vermont Book Award in 2016.

Scribner published her first story collection, Birds of a Lesser Paradise, in March 2012, which was a Barnes and Noble Discover Pick, Indie Next selection, and one of Huffington Post‘s Best Books of 2012.  Scribner also published Almost Famous Women in January 2015, also an Indie Next selection, NEIBA bestseller, and the 2016 Sigma Tau Delta Convention Common Reader. Her next book, a novel—The Exhibition—is forthcoming from Scribner.

Megan’s work has been published in the Best American Short Stories anthology in 2011 and 2015.  She has been featured on NPR’s Weekend Edition and her work has been read on NPR’s Selected Shorts. Her stories have been translated into German, Dutch, and Italian, and she publishes regularly in the New York Times, Ploughshares, Salon, and Oxford American. She serves on the board of directors for the Governor’s Institutes of Vermont and helped launch the Bennington Young Writers Program in 2016. 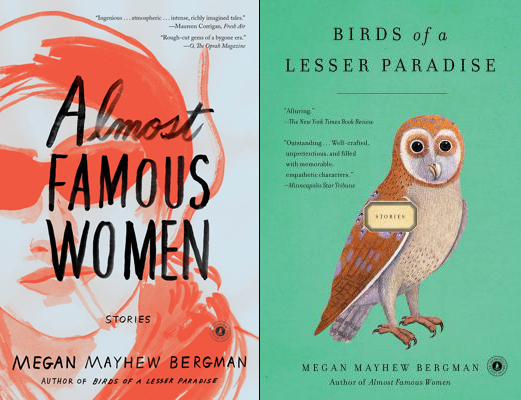 Birds of a Lesser Paradise