Charles Baxter’s novel, The Soul Thief, asks its readers a central question: what makes us who we are? Is it our possessions, our name, our ideas, our home, or our work? What do we do when we find our identity challenged? 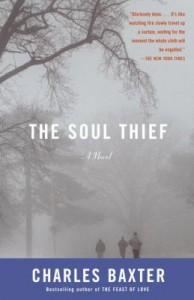 Publishers’ Weekly describes The Soul Thief as an “assay into the limits of character, fictional and otherwise.” The novel is written in two halves: the first centers on Nathaniel Mason’s ‘70’s era graduate studies in Buffalo, where he is drawn into a dangerous friendship with the flamboyant Teresa and her occasional boyfriend Jerome Coolberg; in the second half, Coolberg re-enters Nathaniel’s seemingly mundane middle class suburban life. Obsessed with Nathaniel and appropriating clothing, notebooks, and even anecdotes about Nathaniel’s life, Coolberg is the “soul thief” of the title, and the dramatic effect on Nathaniel of these thefts opens up questions of personal identity and psychic wholeness.

Although both the novel’s “soul” and “thief” characters are men, its focus on women characters is both intriguing and very much “of the seventies”: that forgotten decade between the anti-war and Civil Rights sixties and the conservative and recession-prone eighties. The novel’s women emerge from childhoods that prepared them for Leave it to Beaver adulthoods, but instead find themselves unprepared for womanhood after second wave feminism. Nathaniel Mason is haunted by women, their memories, their words, and most tellingly, their deliberate silences. The novel suggests that Mason will construct his identity against that of his “soul thief”; that identity, however, is also formed in response to his sister and to the women he meets and loves in Buffalo.

Charles Baxter lives and teaches in the Twin Cities, but the novel is never set there. Nonetheless, its interest in homecoming and in finding one’s true self fit The Soul Thief into our 2016 Convention theme “Finding Home.” Since its first settlement by European immigrants in the early nineteenth century, groups of people have come to Minnesota to stay. Taking advantage of both its Mississippi River and Great Lakes ports, European settlers farmed, mined, trapped, and manufactured. Despite its climate, Minnesotans “trust in coffee and warm clothes,” according to the Minnesota native Garrison Keillor, whose radio show Prairie Home Companion chronicles events in the fictional Minnesota town of “Lake Wobegon, where all the women are strong . . . and all the children are above average.”

The 2016 Common Reader will allow us all to explore fictional settings in the very vibrant Twin Cities, one of America’s more beautiful urban centers. The New Yorker describes Charles Baxter as a novelist with a “talent for creating uncanny settings and telling details.” The novel delivers both dramatic tension and a final twist. Professor Baxter is the Edelstein-Keller Professor of Creative Writing at the University of Minnesota. The Soul Thief was published in 2008 by Pantheon.