The Comma Queen Comes to Convention

Join us in Cincinnati, OH, at the Sigma Tau Delta 2018 International Convention for one of this year’s featured speakers: Comma Queen Mary Norris. On Friday, March 23, from 9:30 to 10:45 a.m. during Concurrent Session D, Norris will host an intimate, informal session titled A Conversation with Mary Norris. After lunch, join us in the 4th floor Pavilion for Norris’s Featured Speaker presentation, to be followed in the 4th floor Foyer by a book signing.

Last year, during the chapter roll call at the General Business Meeting, one chapter’s members responded with this rallying cry: “Oxford comma forever!” They got one of the biggest laughs of the convention, which speaks volumes about one of the things that unites us as a group, our love of language, writing, and all matters related to them, including punctuation and usage.

That’s why, when we were considering writers to invite to speak at this year’s convention, Mary Norris, the Comma Queen, stood out as a natural choice. Norris, in her career at The New Yorker as a proofreader, editor, and writer, has accumulated many stories about her experiences with writers and editors as well as tremendous knowledge and insight into the issues surrounding usage and style. (I should note here that although Norris also staunchly advocates the Oxford comma (huzzah!), she prefers to call it the serial comma.)

Norris shares her stories in Between You & Me: Confessions of a Comma Queen, which opens on page one with her first job (“checking feet at a public pool,” which makes me feel much better about my first job working the drive-through at Taco Bell!) and carries us through stints working in a costume shop and delivering milk before she found her true calling. She describes her revelatory experience with a well-used word (“synecdoche,” in an article in The New Yorker by John McPhee) on p. 8, and although she didn’t immediately begin work at The New Yorker after that, she was there within a year. 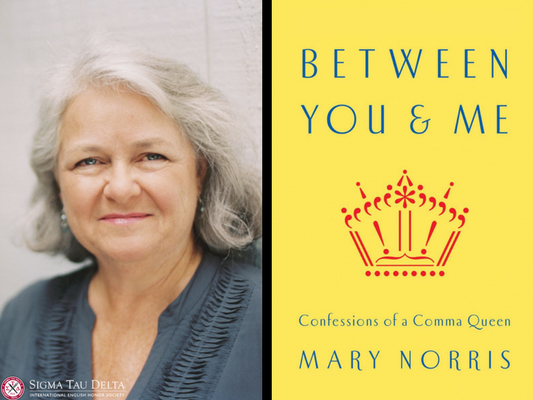 While Norris’s expertise gives her opinion weight, her tone throughout her book is humble, as when she describes her early jobs, including her start at the magazine. She explains her own encounters with grammatical and spelling difficulties, sharing her thought process in working through such concepts as restrictive and non-restrictive clauses and, of course, the reason why “between you and me” is correct and “between you and I” is not. All of her stories, however, are told with humor and understanding of the foibles of others using our very complicated language.

Given that Norris is a copy editor and writer at a publication that routinely features important contemporary writers, her humor and humility might come as a surprise to some, but not to me. She opens chapter two with the common perception of copy editors as fearsome but notes, “I don’t make a habit of correcting people in conversation or in print—unless it’s for publication and they ask for it, or I’m getting paid.” I related to this public perception of copy editors because when I tell people I’ve just met that I’m an English professor, they often blurt out, “I’m not very good at English!”—as if I were going to take a red pen to our small talk. I’m sure many of you have had similar experiences when people find out that you’re “good at English” (whatever that means) or even just that you care about language.

The other aspect of this perception of copy editors and others who care about language lies in the notion that we have rigid ideas about correctness that never change and that we wield them like a weapon to punish others. However, you and I know that those of us who care about language often follow it like others follow their favorite sports team or fashion: we want to know what’s happening with our favorite players (like the Maine court case that hinged on the lack of an Oxford comma)  and what trends are emerging. It’s true that we may not like some trends, such as when they are founded in a mistaken use, for example, or an overuse of a particular word, but others have a bigger significance than correctness, like our evolving thought on personal pronouns.

One of the things I like best about Mary Norris is how she addresses some of these issues in her video blog. In a two-part series from 2016, the Comma Queen takes on the singular “their,” first addressing the issue of number agreement (for which she recommends thoughtful rewriting rather than misusing “their” in this way), but then addressing the use of “their” (and some other options) as a gender-neutral pronoun. On this latter issue, Norris concludes that we should call people what they want to be called, grammatical issues aside. Because we understand the power of language to construct reality, we understand why this position is important, and I’m grateful to have a thoughtful voice like Norris’s commenting on it.

As I noted in my earlier blog, one of the best things about convention is the opportunity to meet and talk with writers who care about the same things we do, and Mary Norris definitely fits that category. Between you and me, I’m looking forward to meeting her in March. 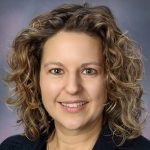